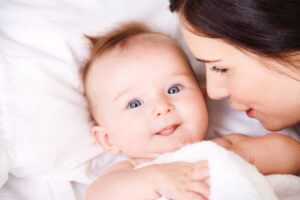 I have been a longtime fan of Dr. Patricia Kuhl and Dr. Andrew Meltzoff. They’re the co-directors of the University of Washington’s Institute for Learning and Brain Sciences and the authors of The Scientist in the Crib: What Early Learning Tells Us about the Mind. The book is wonderful reading for new parents and educators. These internationally renowned experts on infant and child development have played a major role in demonstrating how early exposure to language alters the brain in amazing and significant ways, and their findings around infant imitation have revolutionized our understanding of early cognition, personality and brain development. While they’ve never researched sign language with hearing babies and parents, their research findings about infant language and brain development clearly support and substantiate why signing with hearing babies is so effective.

Their 2013 study demonstrates that while in the womb, babies begin learning language from their mothers! Sensory and brain mechanisms for hearing are developed at 30 weeks of gestation. This new study shows that unborn babies are listening to their mothers talk during the last 10 weeks of pregnancy and shortly after birth babies can demonstrate what they’ve heard, showing a preference for their native language and recognizing what they heard in utero. Really gives the phrase “mother tongue” a whole new meaning, doesn’t it? Previously, it had been proven that infants are born ready to learn and begin to discriminate between language sounds within the first months of life, but there was no evidence that language learning had occurred in utero prior to that study.

These findings are further evidence that babies understand language and have an innate desire to communicate so much earlier than we’ve previously given them credit for, which is why signing with hearing babies is so effective. The cognitive ability, memory, desire and understanding of language are in place long before a baby’s vocal cords are fully capable of making intelligible speech possible. Vocal chords aren’t fully engaged until at least 16 months of age. However, we now know that babies have a significant understanding of language at birth. Add to that the fact that manual dexterity, visual acuity and memory, all needed to make signing possible, start to come together as early as five months of age! This is why hundreds of Hop to Signaroo ® graduates have started signing as early as five and six months of age, reducing babies’ and parents’ frustration long before speech is possible.

So what’s the moral of the story? Keep talking to your baby, even in utero, as your little one understands so much more about speech and language than you may have originally thought. And, of course, join us for a Hop to Signaroo class because your baby arrived with the ability and desire to communicate with you!