Home > Articles > Sign of the Times: Cracking the Code of Parenting 101

Sign of the Times: Cracking the Code of Parenting 101 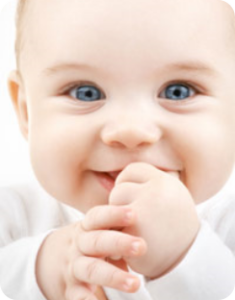 Sound familiar? Perhaps it’s time to join the legion of relieved, Hop to Signaroo ® parents who feel as if they’ve cracked the code of Parenting 101 by signing with their babies to greatly reduce frustration many months before speech is possible. What may seem like a recent trend has actually been a tool parents have been using for several decades, since the first books about baby sign language were written in the 1980’s. Judging by the families embracing the movement with each new addition to the family, signing for hearing parents and babies is here to stay!

Hearing families are enthusiastically and successfully using American Sign Language (ASL) vocabulary with their hearing babies as a temporary bridge to communication, many months before their babies are able to speak. First spoken words generally come at about 12 to 14 months of age. Based on vocal cord development and how happy the sounds of “Momma” and Dadda” make the big people, babies routinely repeat these first words and just a few others for several months before they can truly express their needs and wants with spoken language. Vocal cords aren’t fully engaged until at least 16 months of age, and babies aren’t typically expressing very specific needs until closer to two years of age. However, babies do have the manual dexterity, memory, cognitive ability and linguistic understanding to express their needs and wants through sign language as early as five months of age! Little ones understand and want to express much more than they’re able to verbalize at an early age.

Wondering how to start? Start with your baby’s basic necessities such as “milk”, “eat”, “more”, “diaper change” and move on from there, adding favorites such as “music”, “pacifier” or “teddy bear”. Model signs throughout the course of your normal routine as you feed your little one, change a diaper or go for a walk. Be sure to speak as you normally would, in complete sentences, and sign just the key words you want the baby to ultimately sign back to you, such as “milk”, “change”, “eat”, etc.

Consistency is key. In the first month, model at least a dozen signs regularly so your little one won’t simply use one sign for everything, which is typically what happens when only three or four signs are introduced at the start. The more signs you use consistently, the quicker your little genius will recognize the signs and then sign back, appropriately using the signs to tell you what they want! With regular use of at least a dozen signs, most babies recognize the signs within the first few weeks and sign back within a few months, if the babies are at least five months of age when their parents begin signing with them.

Families who enthusiastically embrace signing and take a baby sign language class, like Hop to Signaroo ®, often see results even faster. On average, most Hop to Signaroo ® babies are recognizing signs within the first two to three weeks and signing back within two to three months. However, hundreds of families in my classes have reported their babies have signed their first sign within the first month of signing. Some have even signed for the first time in class! Those are babies after my own hear – some of us just love to have an audience!

Make signing fun! Add the signs to your daily routine but also sign when you read or sing to your baby and get all family members involved, so your little one is able to communicate with all primary caregivers and sees the signs modeled by everyone on a regular basis.

Will signing slow down my baby’s speech? This is the most common concern and the answer is a resounding “No”. When you sign with your hearing baby, you’re addressing language before speech is possible. Speech is a natural reflex and all babies are born with the ability and desire to speak, barring any physiological challenges that would impede speech. Babies hear an average of 4,500 words throughout the course of a day, so a normally developing hearing baby will never choose sign language over their natural inclination to speak. This would be like saying, “I won’t let my baby crawl because they’ll become too dependent on crawling and will never walk”. Babies move through developmental stages using the skills they have at the time until they’re developmentally able to move on, and sign language is just another one of those stepping stones – a highly effective stepping stone that helps take the guesswork out of parenting!

Choosing a program with American Sign Language vocabulary will ensure that the practice does not interfere with speech, as a few baby signing programs use created gestures, not true ASL signs. Some of these created gestures involve sniffing, panting and blowing and, yes, that will slow down speech. However, when you use ASL signs and model speech as you normally would, your little genius will sign, then sign and speak, and once they realize their speech is completely intelligible, the signs will fall by the wayside. Remember, speech is a natural reflex in all babies and your baby’s speech will likely benefit from the use of sign language. Many families report that their little ones were stringing two to three signs together by the time they were a year old and then began speaking in two to three word sentences much earlier than their non-signing peers. As an added bonus, many parents say the “Terrible Twos” weren’t so terrible, because their little one didn’t have two years of built up frustration from not being understood!

Wouldn’t you like a household that’s calmer for you and your baby? Don’t you want to bond with your baby in a unique way that lays the foundation for positive communication that will last well beyond the toddler years? Then signing may be the answer, as early communication and reduced frustration are literally at your fingertips!